The Month of Beginning

An excerpt from Matt McCarthy’s tales of being a medical resident: The Real Doctor Will See You Shortly.

Every July, residents have their first experience of treating patients in teaching hospitals across the United States. No matter how rigorous the academic preparation, the real practice of medicine is an art that must be learned, step by painful step. In The Real Doctor Will See You Shortly, author and physician Matt McCarthy recounts his first year of medical residency at the NewYork-Presbyterian Hospital/Columbia University Medical Center in New York, under the watchful eye of “Baio”—a second-year resident who becomes a personal mentor.

Baio broke the silence. “All right,” he said, “I’ll start. Can you draw blood?”

“Can you put in a nasogastric tube?”

“Ha. That’s a no. Ever done a paracentesis?”

He smiled. “Did you actually go to medical school?”

Even I had to wonder. If Baio had been asking me to recite pages from a journal article on kidney chemistry or coagulation cascades, I could’ve put on quite a show. But I hadn’t learned much of the practical business of keeping people alive, skills like drawing blood or putting in a urinary catheter. Harvard hadn’t prioritized them. In fact I had been allowed to skip the CCU month of my med school training at Mass General so I could learn tropical medicine in Indonesia. Who had talked me into that?

“I graduated from Harvard earlier this month.”

“Oh, I know you went to Haaahvaahd,” Baio said with exaggerated fake reverence. “But do you know how to order medications?”

A bright spot. “Some!” I practically beamed.

“Do you know how to write a note?”

“Yes.” The moment I said it I realized just how paltry a contribution it would seem to him. Baio must have seen my face drop.

“That will actually be a big help,” he said. “Examine every patient and write a note on them for the chart. That will save me time. You need to be concise yet precise.”

I grabbed my small notebook and scribbled examine everyone/write notes.

“And listen,” he said while chewing on a stale bagel, “if I want a sandwich tonight, go to the cafeteria to get me a sandwich. And if I ask for a coffee when you return and give me that sandwich, do you know what you should do?”

One of the nurses tapped me on the shoulder and asked me to order a blood thinner for a patient, but Baio cut her off. “Dr. McCarthy is not yet a functioning member of society,” he told her before putting in the order himself. I watched over his shoulder as he typed away.

“The nurses will know what medication the patient needs before you do,” Baio said.

After finishing with the order, Baio turned and looked me up and down while grabbing another bagel. “You may be thinking, Why is this guy an asshole?”

“Well, I’m not an asshole.” He returned to the computer. “I’m stuck in this enclosed unit for the next twenty-something hours. I can’t leave. The only way I can step outside of this unit is if a cardiac arrest is called over the intercom and I have to go bring someone back to life.”

“And if that happens, you’re alone in here. It’s just you. All alone. And them,” he said, spinning his hand once around his head.

“Now, if you keep me well fed and caffeinated, I will be happy. And if I’m happy, I will feel inspired to teach you a thing or two about how to actually be a doctor.”

And that was the truth of it. Baio, one year my senior, would essentially be teaching me how to be a physician. It was hard to believe he had been an intern just last week; the man looked like a sample photo at Supercuts. At Columbia, as at most teaching hospitals, interns were paired with second-year residents to manage between twelve and eighteen patients, and were provided with varying levels of supervision by attending, board-certified physicians who met with us every morning at 7:30 to discuss our plans for the day. But the guts of the day, the minute-to-minute, I’d spend hooked to Baio.

“I want nothing more than to keep those patients alive,” I offered, perhaps a touch too earnestly.

He waved his hand at me. “Yeah, yeah. Just show up on time and bust your ass.” This I could do. It was a philosophy a former baseball coach of mine had sworn by. “Looking at you, I’m thinking two things,” Baio said. “One, you kinda look like someone I know. You both look like big ol’ meatballs.”

It was not the first time my admittedly WASP jock appearance had been skewered by a member of the healthcare community. In medical school, a female classmate named Heather had told me without prompting that I looked like my name was Chad and I attended prep school in Connecticut. This woman, who bore more than a passing resemblance to Anna Chlumsky from My Girl, would be surprised to learn that I’d spent the first decade of my life in Birmingham, Alabama, and the second in the indeterminate sprawl of a suburb outside of Orlando, Florida. I’d won her over after accepting a dare to ask a well-regarded diabetes researcher if he’d ever considered calling the condition “live-abetes” to give it a more positive spin. He was not amused. But she was; we’d started dating shortly thereafter and had come to New York together to join Columbia’s internal medicine training program. Heather was in her second year of residency, a year ahead of me. I wished she were here to whisper advice into my ear.

“What’s the other thing?” I asked Baio.

He smiled. “You look terrified.” 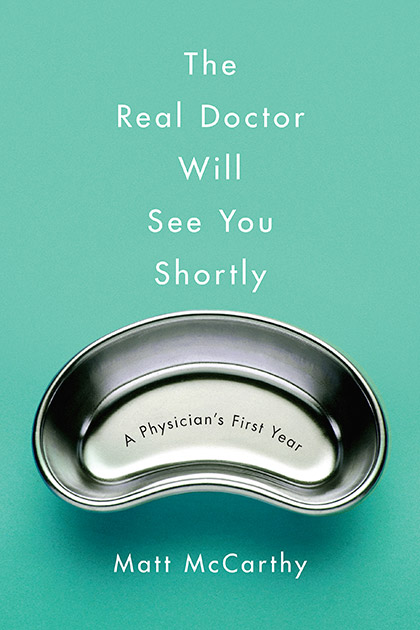 Reprinted from The Real Doctor Will See You Shortly. Copyright © 2015 by Matt McCarthy. Published by Crown Publishers, an imprint of the Crown Publishing Group, a division of Penguin Random House LLC.