The risk of dying from heart disease varies dramatically from one ZIP code to the next. Researchers are teasing apart the reasons why.

HEART DISEASE HAS BEEN THE LEADING CAUSE OF DEATH IN THE UNITED STATES for more than 100 years, and the fact that it is particularly devastating in certain parts of the country is not news. For decades, people in the southern and southeastern states have died from cardiovascular disease at higher rates than those in the rest of the country. But when geographic details are examined with a finer lens, the disparities become even more pronounced—and sometimes less explicable.

“Literally from one highway exit to the next, you can see dramatic differences in mortality from heart disease,” says Gregory Roth, assistant professor at the Institute for Health Metrics and Evaluation (IHME) at the University of Washington School of Medicine in Seattle. He and his IHME collaborators have been looking at this variation for some time, and they recently published a series of maps in JAMA showing it in county-by-county detail.

His maps cover the death rates for 11 types of cardiovascular disease. Some variation seems to be a direct result of poverty and a lack of access to health care. The speed of emergency care—a problem in both remote rural areas and congested cities—is also a factor. And the local prevalence of major risk factors, such as hypertension, obesity and smoking—a particular problem in the South—also correlates strongly to a higher risk of dying from heart disease, says Roth.

But other variations were more difficult to explain. Patterns of death from heart disease have unexplained hot spots, especially for some rarer conditions. He says that these may be associated with local behavioral risks or with the capabilities of a particular hospital or health department.

“Looking at very small geographic distances may be a better way to understand the disparities in both the risks and treatment of heart disease,” Roth says. And IHME’s data may help direct new research to discover why there are positive and negative outliers.

Some researchers have begun to respond. Roth’s map shows that deaths from aortic aneurysm—a condition in which the body’s main artery becomes distended—are unusually prevalent in northern Minnesota and Wisconsin. 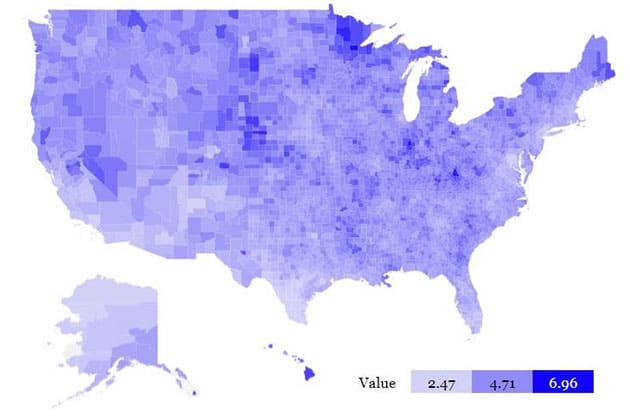 “Accessibility to health care is an important factor to consider here,” says Rumi Faizer, associate professor of surgery and co-director of the University of Minnesota Health Aortic Center in Minneapolis. He notes that because Minnesotans typically have easy access to care, they may be more likely than others to have the disease diagnosed. “Our health-system-wide screening program at the University of Minnesota, for example, picks up aneurysm 11% of the time, which is more than double the expected 2% to 5%,” Faizer says.

Cerebrovascular disease, which interrupts the flow of blood to the brain, also has an odd distribution. While incidence is high along the heart attack and stroke “belts” near the southern Mississippi River, there are also high mortality rates in Georgia and the Carolinas. 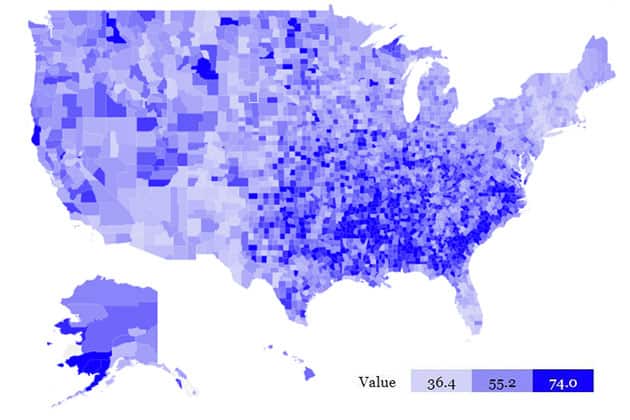 “Are these states affected because more people are having stroke in the Southeast—which means a higher incidence—or because once someone in the Southeast has a stroke, they are more likely to die?” asks George Howard, professor of biostatistics at the University of Alabama School of Public Health in Birmingham. “If the contributing factor is incidence, then we need population-based interventions. Conversely, if it’s that they’re more likely to die—‘case fatality’—then we need hospital-based interventions to improve the quality of stroke care.”

And atrial fibrillation, an erratic beating pattern of the two upper chambers of the heart, is the cause of death most often, proportionately, in western Oregon—an area where unique risk factors are hard to pin down. 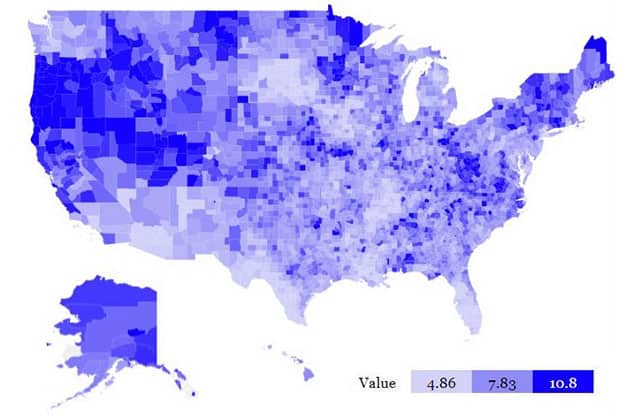 “We need to be careful about defaulting too quickly to an assumption that pockets of high mortality from cardiovascular disease represent a biological phenomenon,” says Harlan Krumholz, a cardiologist and health care researcher at Yale University. While it may be tempting to assume the influence of local genetics or a rare risk factor, the solution may be much more mundane. One possibility is a paperwork bias. “There are no standard approaches to labeling cause of death on death certificates,” says Krumholz. “Physicians may report cardiovascular disease when they really don’t know the cause of death.”

Whatever the reasons, these finer-grained maps point to a checkered approach to health care throughout the United States in which not everyone struck by heart disease may have an equal chance of survival and recovery. The next step, of course, is to create greater parity of outcomes.