These remarkable devices are saving soldiers, improving lives after combat—and benefiting civilians too.

SOLDIERS INJURED DURING THE MARCH TO BAGHDAD in the spring of 2003 were rushed to small tent hospitals behind the lines. Marvels of twenty-first century logistics, these mobile units each contained two operating tables and four beds equipped with ventilators in a compact 900-square-foot space, where surgeons were poised to stop the bleeding, wash out and pack wounds, and staple off injuries to vital organs.

Both innovations—moving surgical teams and facilities closer to the action—represent a radically new and effective approach. In 2004, an article in the New England Journal of Medicine described the battlefield changes and reported that mortality among U.S. combatants wounded in action had dropped to only 10%, down from the one in four who died from wounds in Vietnam and the 30% death rate during World War II.

Not that the Army’s forward surgical teams are solely responsible for the decrease. The urgency of a war effort provides particularly fertile ground for invention, and soldiers and Marines in Iraq and Afghanistan are benefiting from many technological and medical improvements—bullet- and shrapnel-stopping Kevlar vests and helmets; clotting agents carried by the troops to stop the hemorrhaging responsible for half of all battlefield deaths; and special vacuums that clear wounds and sharply cut infection rates. Their effectiveness gauged during the heat of battle, many of these innovations may soon move stateside. 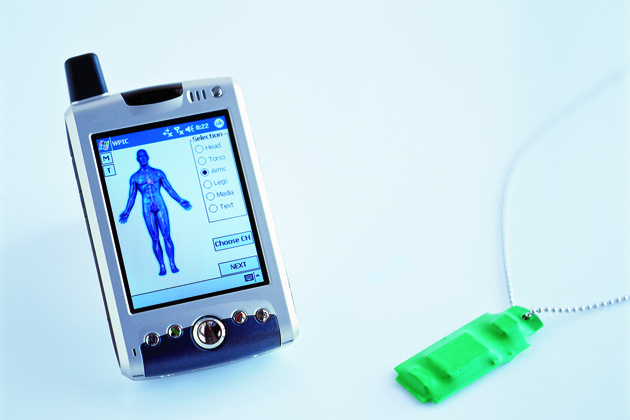 Wired to save lives, the dog tag could soon be much more than just a steel necklace engraved with a soldier’s name and company. Prototypes of wireless personal information carriers (WPICs) can encapsulate more than 20 years of individual medical records—including information on blood type and allergies, doctor’s comments, even video and audio files—and can be activated when medics come within 10 yards of a wounded soldier, instantly transmitting files to the medic’s PDA. WPICs could have civilian applications too, helping to simplify routine exams and giving emergency personnel immediate access to patient data. 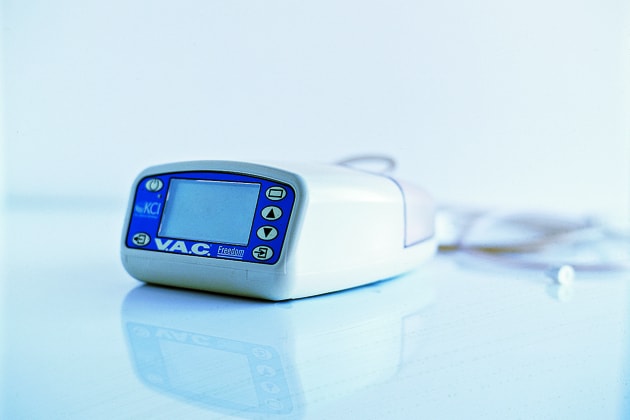 Few medical devices have saved more lives in Iraq than the wound vacuum, which has cut rates of infection among wounded U.S. combatants to a mere 1%. Using a sponge and sticky plastic sheeting as dressing, the device cleanses open gashes by sucking out excess fluids for as many as three days between dressing changes. “The vacuum has changed how we deal with war wounds,” says Air Force trauma surgeon Lt. Col. Donald Jenkins. A smaller version is being used to treat civilian wounds caused by diabetes,vascular diseases and trauma. 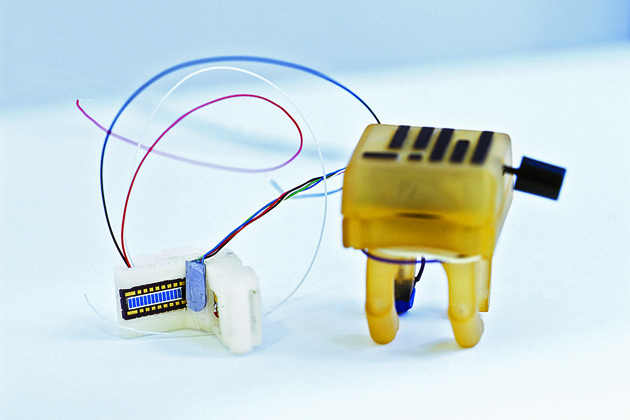 FINGER ON THE PULSE

The quickest way to a soldier’s heart could be through her finger. Andrew T. Reisner, an emergency physician at the Massachusetts General Hospital, is developing a lightweight, ringlike sensor that measures the wearer’s pulse, blood pressure and cardiac output. A battery-powered motor squeezes the finger like a traditional blood-pressure cuff and optically measures changing pressures using a beam of light. Reisner is working on a model made of a polymer actuator fiber that could be built into the gloves or sleeves of a soldier’s uniform and programmed to wirelessly transmit vital signs. At home it could monitor elderly patients and others with blood-pressure problems. 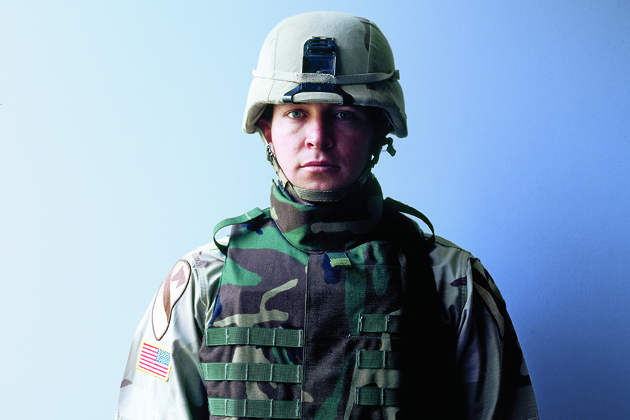 Roadside bomb blasts are the major killer of U.S. troops in Iraq, and flying shrapnel isn’t the only danger. High-intensity shock waves can explode lungs and scramble brains while leaving no visible external injuries. According to computer modeling done by the Massachusetts Institute of Technology’s Raul A. Radovitzky, the vests troops now wear don’t deflect the waves but, in fact, amplify them, increasing the deadly force. Radovitzky is identifying materials from which clothing might one day be created that diffuse pressure during an explosion. Another development underway at MIT’s Institute for Soldier Nanotechnologies is a sensor-activated vest that detects a blast wave and deploys a countermeasure, much like an air bag. The technology is still in the conceptual stage, but eventually such vests could be worn by police bomb squads or even by civilians in terrorist-targeted areas. 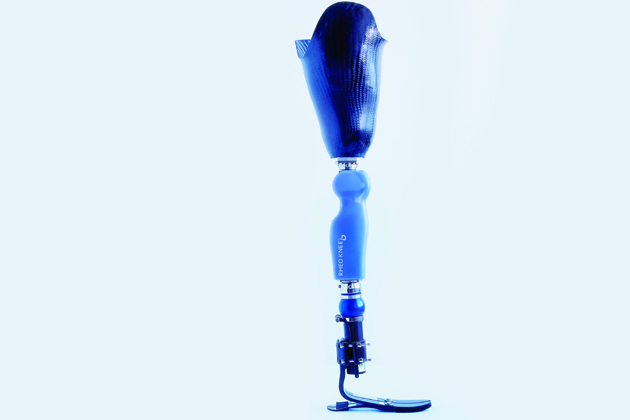 An ebbing death rate from battle wounds means a rising tide of maimed survivors, including hundreds of blast victims absent a limb. Though Hugh Herr didn’t lose his legs in war—it was from frostbite on a mountain-climbing trip—he can empathize, and at the Massachusetts Institute of Technology’s Media Lab, the mechanical engineer is working on a prosthesis that could dramatically improve the lives of wounded soldiers and civilian amputees. The Rheo prosthetic knee uses artificial intelligence and a battery-powered microprocessor to “learn” an individual’s walking style. Sensors measure changing joint positions and weight placement at a rate of 1,000 times a second, while a magnetorheologic actuator—using a magnetic field and an electromagnet—increases or decreases resistance at every step. Herr also has plans for an advanced foot-ankle prosthesis. In fact, he says, a new generation of lifelike limb systems may be only four to five years away. 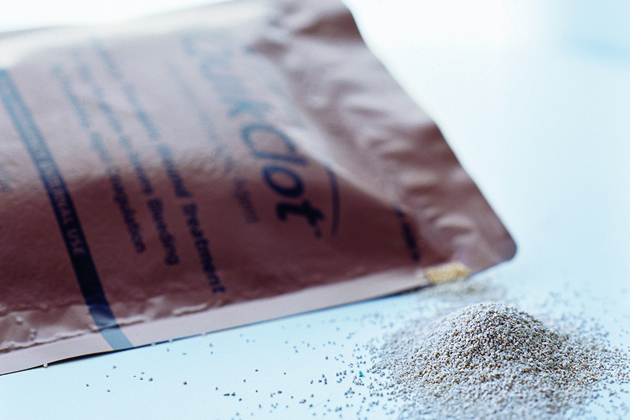 On the battlefield, it may take 30 to 40 minutes to reach the injured, says Massachusetts General Hospital trauma surgeon Hasan B. Alam. That delay contributes to this grim statistic: Half of those killed in the field die from loss of blood. But Marines in Iraq now have a tool for stanching the flow until help arrives. They carry packets of QuikClot, a granular zeolite powder that looks like cat litter and can be spread over even the most severe wounds; it rapidly adsorbs water in the blood and causes it to clot. A second version, QuikClot ACS, consists of a porous pouch of the clotting agent wrapped in surgical gauze that can be packed directly onto a wound. Alam tested the agents on pigs but says their first human use was in Afghanistan. Civilian firefighters and emergency medical technicians are already using the product. 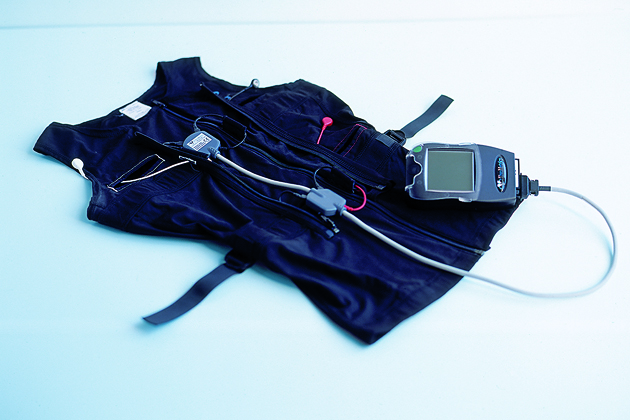 Imagine a medic rushing from one downed soldier to the next, struggling to gauge injuries and determine whose needs are most urgent. If he could get an instant readout of each soldier’s condition—and then broadcast the data to a nearby medical team—more effective triage would result. That’s the promise of the LifeShirt System, a vestlike monitor that channels low-voltage current continuously through sensors measuring more than 30 functions, including heart rate, patient posture, respiration and blood-oxygen saturation. Data can be analyzed and screened on a PDA, saved on a flash memory card and wirelessly transmitted up to a mile away. Already used to monitor firefighters during training exercises, the LifeShirt is being adapted by the military to monitor soldier respiration, though the device hasn’t yet been deployed in Iraq.