The Atom and the Adam’s Apple

The use of energy waves in medicine leapt forward with the contributions of two Bulfinch pioneers.

A handful of discoveries about radiation—why energy waves are produced by some processes and materials and the ways those rays might be used—would have a profound impact on science. In medicine, they would vastly improve how physicians diagnose and track disease and how they treat it, with two major milestones happening in the Bulfinch Building.

In 1896, Walter James Dodd worked in the hospital as a pharmacist and in-house photographer. News arrived about German physicist Wilhelm Conrad Röntgen, who had discovered a form of invisible light that he called X-rays. When directed at the human body, the rays could pass through flesh but be absorbed by bone and other dense materials.

That was of immediate interest to surgeons, who could use X-rays to locate a bone fracture or a bullet. So Dodd and his assistant, Joseph Godsoe, cobbled together a crude, hand-cranked version of Röntgen’s device. By March they had succeeded in producing their first, faint X-ray image and by the next year, an X-ray department was established below the Bulfinch Building’s front steps. 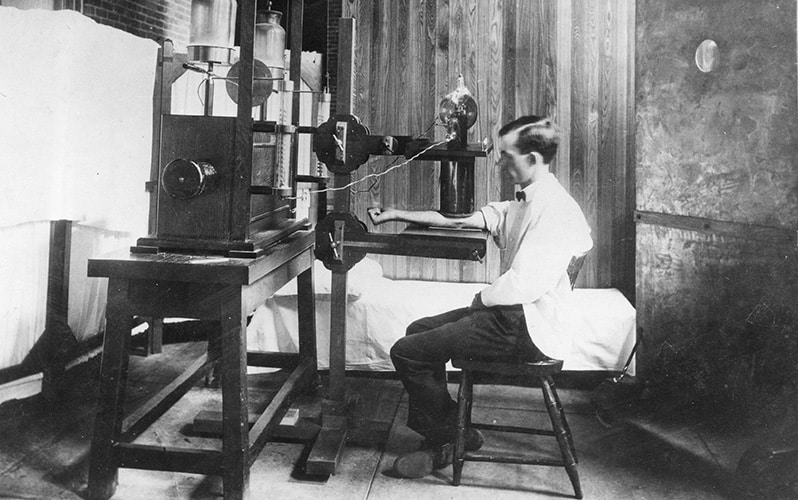 Walter James Dodd tested X-ray devices on his own hands. Later physicians have called him a “martyr to radiology.” Source: Courtesy MGH.

To determine whether vacuum tubes in the X-ray machine were adequately warmed up, Dodd would hold his hands in front of the device. That practice eventually led to painful, sunburn-like damage to his skin, and soon malignant tumors had formed, requiring the amputation of several fingers. The malignancies metastasized, and Dodd died—a martyr to his new field—in 1916.

One of Dodd’s interests had been how to harness those rays to fight disease. Decades later, in 1936, Saul Hertz, a child of Jewish immigrants and director of MGH’s Thyroid Unit, had the same question. Could iodine, which naturally accumulates in the thyroid gland, be made to emit rays of intense energy as a tool to treat thyroid disease? His colleague Arthur Roberts, a Jewish physicist at the Massachusetts Institute of Technology, produced the first radioactive iodine (RAI). After several years of laboratory work and animal testing, Hertz administered RAI to a woman in the Bulfinch Building on March 31, 1941. Then in a clinical trial, 29 patients with hyperthyroidism were treated with RAI. Of those, 20 were cured.

Saul Hertz pioneered the field of nuclear medicine, in which radioactive materials are administered to detect, track or treat a disease. Source: Courtesy MGH.

This was pathbreaking work in a field that would later be called nuclear medicine, which uses small amounts of radioactive materials to see and treat disease. Unfortunately when Hertz left to serve in World War II, an MGH colleague took over the work and submitted a paper to the Journal of the American Medical Association, failing to credit Hertz and Roberts. The editor of JAMA then asked Hertz to submit a manuscript describing his study and took the extraordinary step of publishing both papers in the same issue.

Sadly, Hertz met an untimely death at age 45, but the fruits of his work continue. RAI remains a standard therapy for hyperthyroidism. More broadly, the applications of his idea continue to grow in the burgeoning fields of nuclear medicine and precision medicine.