Often, biology knows best, which is why these medical innovations borrow liberally from natural properties and processes.

IN HUMANKIND’S QUEST TO FLY, countless inventors copied the experts—birds. And the special stick-to-itiveness of burrs inspired Velcro. Yet despite nature’s long history of inspiring solutions to human problems, we’ve always supposed we could do nature one better. But the advent of nanotechnology and sophisticated computer modeling has enabled scientists to examine exactly how nature works—and to find that, often, our materials and processes don’t measure up to those that have existed for millions of years.

Researchers have studied how an abalone assembles calcium carbonate crystals gathered from seawater and then layers them on a soft polymer of its own making to construct a nontoxic shell more durable than the strongest ceramics—a process that could improve implant materials and prosthetics. And how algae use chemicals called furanones to jam the signaling systems that allow bacteria to communicate, a possible model for antibacterial coatings for medical devices.

Biomimetics, a term coined in the 1950s, involves adapting natural structures and processes for human use, and these days the field is burgeoning. In medicine, scientists across many specialties are studying creatures’ means of locomotion, protection and survival, then devising surprising ways to mimic those ingenious natural accomplishments. The more secrets we decode, the more likely it becomes that the next medical miracle might literally be found under a rock. 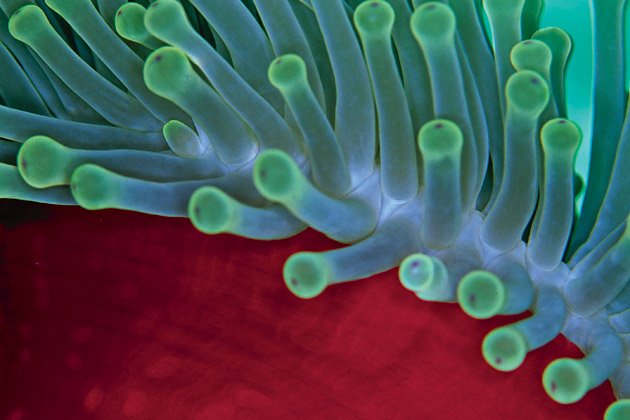 Sea anemones, along with other members of the phylum Cnidaria, which includes corals and jellyfish, have evolved highly efficient means to capture prey and deter predators. Their feeding tentacles have specialized stinging cells called nematocytes that contain microcapsules called nematocysts. When they detect the presence of food or foe, the nematocysts fire harpoonlike hollow threads through which the anemone pumps a cocktail of deadly toxins.

NanoCyte, a biotech startup in Zemach, Israel, is extracting microcapsules from the cells of sea anemones (which are nontoxic to humans) to create a topical-drug delivery device. Each microcapsule is dehydrated into a sterile powder and immersed in a gel, but remains intact. A patient must first apply the gel, then the drug itself in liquid form. The drug rehydrates the microcapsules, then the pressure of osmosis forces the hollow, barbed thread coiled in the microcapsule through the skin. Once the drug has been pumped into the patient, the threads degrade in the skin. And because only minuscule quantities of an active pharmaceutical ingredient penetrate the skin, the risk of side effects is low.

NanoCyte says the technology could be used to treat a range of ailments, including psoriasis, skin cancer and diabetes (by delivering insulin). The company will soon launch creams for treating acne and wrinkles, and a U.S. pharmaceutical company is developing a fast-acting local anesthetic cream. 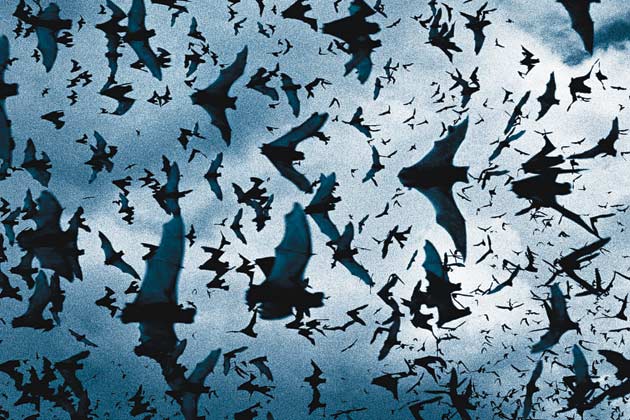 At dusk, bats navigate through twilight, zeroing in on prey they can’t see by using pulses of ultrasound (beyond the range of human hearing) that they generate in their larynx and send out through their nose or mouth. The bats’ highly sensitive ears then catch echoes of waves bouncing back from objects in their path, and the bats use the timing and shape of the returning waves to calculate the objects’ positions as well as their shape and texture. This remarkable adaptation, which enables bats to detect objects as fine as a human hair, allows them to thrive at night, when there is less competition for insects and other food.

Modeling an invention on the bats’ echolocation sonar, researchers at the University of Leeds recently introduced a carbon-graphite collapsible walking cane to aid the visually impaired. The UltraCane’s handle emits ultrasonic waves that bounce off objects as far as four meters away and send signals to the user through two vibrating buttons on the handle. The strength of the buttons’ pulses indicates the direction, height and distance of the objects. The same part of the brain that a bat uses to orient its movements—the superior colliculus—helps a human process the buttons’ pulses to build a spatial map in her mind’s eye of how the obstacles are arranged, allowing her to walk more quickly and confidently than she could with an ordinary white cane. 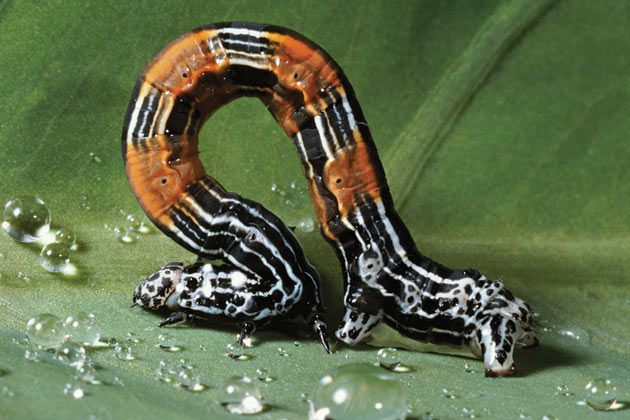 The inchworm, or moth caterpillar, is quite maneuverable. Lacking appendages in the middle portion of its body, it moves forward by clamping down its rear end, then elongating as it lurches forward to locate a spot to grip its front clamp-like foot pads. Finally, the worm releases and contracts its hindquarters to join the front, arched like the Greek letter omega, and repeats. Thus, the worm can “inch” along slippery surfaces and through small openings to hard-to-reach places.

Researchers in robotics at Era Endoscopy, in Pisa, Italy, have copied the inchworm’s locomotion in an attempt to revolutionize colonoscopy. Though a crucial diagnostic tool, particularly for cancer detection, a colonoscope, forced through the colon’s twists and turns, can irritate the walls. The procedure also risks puncturing the colon or causing severe bleeding, as the scope’s stiff, bulky tail is angled awkwardly through the colon to advance the device’s diagnostic head.

Era Endoscopy’s colonoscope, in contrast, moves like an inchworm, clamping one end firmly to colon tissue while compressed air pushes the other end forward. A doctor, using a joystick, directs a steering system behind the scope’s head that helps the device navigate the bowel and adjusts the camera and light source affixed to the scope’s head to provide a clear view of colon walls. In the next generation, the robotic device will carry biopsy tools. 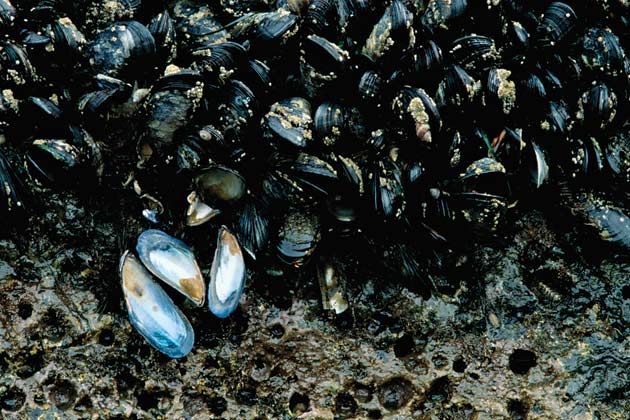 While scuba diving off the coast of Southern California, Purdue University chemistry professor Jonathan Wilker marveled at how tiny blue mussels (Pteriomorpha) clung to rocks being pounded by surf. Back in his laboratory, Wilker deciphered the recipe for the mussels’ strong glue, then created a new generation of nontoxic, surgical adhesives that could set in a wound’s wet environment. The mussels, Wilker discovered, adhere to myriad surfaces—even Teflon—by producing and exuding, from their feet, collagenlike microfilaments with a glue composed of protein molecules. Iron, which mussels filter from seawater, helps the proteins bond and cure, creating an adhesive almost as strong as Krazy Glue, but less toxic, slower to cure (in surgery, a trait that would leave time to correctly position what’s being glued together) and without becoming brittle.

Using the molecular structure of mussel adhesive as a blueprint, Wilker has begun creating polymers that could one day be used to close wounds or reconstruct nerves, or for scaffolding upon which cells and new tissue might grow. 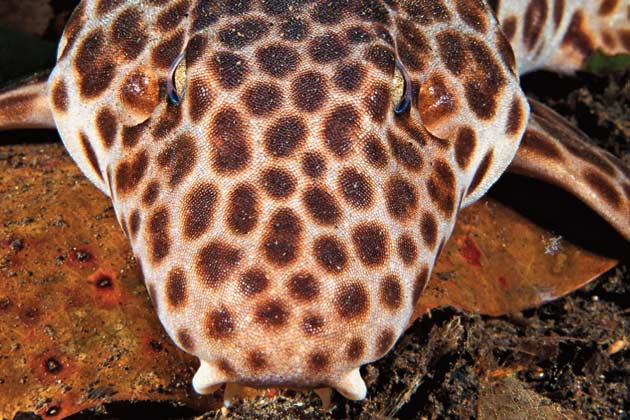 Remarkably, an epaulette shark can survive without oxygen for hours when it’s stranded on coral reefs cut off from the ocean at low tide. As the fish’s cells sense oxygen levels dropping, the shark moves its gills rapidly to take in more oxygen. Once oxygen levels fall 30% below normal, the shark slows its ventilation and heartbeat and relaxes its arteries, reducing resistance to blood being pumped to its brain. Finally, neurons in the brain’s motor regions release the inhibitory neurotransmitter gamma-aminobutyric acid as a signal to power down nonessential functions, and the shark becomes temporarily comatose.

Gillian Renshaw, a professor at the School of Physiotherapy and Exercise Science at Griffith University in Australia, wants to apply the principles of this technique, known as hypoxic preconditioning, to patients at risk of heart attacks and strokes. By using intermittent hypoxia training on humans—administering air with just 12% oxygen content for three- to five-minute intervals during an hour—Renshaw hopes to switch on genes that prompt blood-cell production, capillary growth and the repair of damaged proteins. She thinks these mechanisms will not only help prevent heart attacks but also minimize tissue damage when heart attacks and strokes occur. 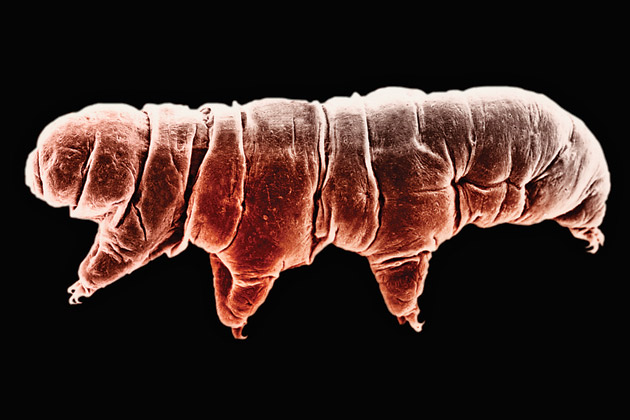 Tardigrades, also known as water bears or moss piglets, inhabit a vast range of aquatic environments but are most commonly found on lichens and moss, where they’re subjected to extreme temperatures and cycles of wet and dry. To survive arid and frozen spells, these half-millimeter-long creatures have evolved an ability to exist in a near-death state for as long as seven years. One method the tardigrades use is anhydrobiosis, in which they suspend their metabolism, replacing water that has evaporated from their cells with a type of sugar and curling into a ball to slow the evaporation of their remaining moisture. When water returns to their environment, tardigrades rehydrate and spring back to life.

The water bear’s amazing adaptation inspired scientists at Cambridge Biostability Limited in the United Kingdom to develop a “stable liquid” technology that allows vaccines to be stored for long periods in temperatures ranging from –4ºF to 158ºF. Vaccines easily lose potency over time, and exposure to high temperatures accelerates the degradation, so proper storage necessitates either refrigerating a liquid vaccine or reconstituting a powdered one. That has stymied health-care efforts in remote, developing regions where neither electricity nor clean water is readily available.

First, the Cambridge scientists spray-dried a liquid vaccine with sugar syrup, making the vaccine viscous. As it thickens, the vaccine forms microscopic glasslike beads called microspheres. Once a droplet of vaccine is embedded in the microsphere, all chemical reactions stop, rendering the vaccine stable. When the serum is injected into a patient, the body’s fluids dissolve the microspheres and release the vaccine.

By mixing microspheres with different vaccines in the same liquid, the company can deliver many vaccines in one dose. It has developed a vaccine against four of the neurotoxins that cause botulism, and vaccines against hepatitis B, Haemophilus influenzae and tetanus will enter trials in 2008. If approved, the three would be combined with vaccines for diphtheria and pertussis in a single-dose defense against these childhood diseases.