Not just pop science, handwriting analysis can be a telling diagnostic tool, revealing signs of bipolar disease, Parkinson’s and other disorders.

CHARACTERISTIC OF HERR HITLER’S HANDWRITINGS are three outstanding traits: indecision,depression and morbid introspection. It takes no handwriting expert to recognize the cramped, drooping, uncertain signature as a manifestation of the Führer’s cramped, self-centered approach to life,” concluded the graphologist Nadya Olyanova in 1939, six years before Hitler’s suicide, according to her 1991 obituary in the New York Times. Olyanova had studied with the Austrian psychoanalyst Alfred Adler, and she was a consultant to the psychiatric services of the Menninger Clinic in Topeka, reported the Times. But like the practice of phrenology—the notion that the bumps and indentations of the skull form a map of character—attempts to analyze one’s disposition through the curve of an o or the tail of a g are considered spurious.

How curious, then, is medical graphology: the use of handwriting to diagnose disease. In the 1950s, the Austrian-American graphologist Alfred Kanfer proposed the idea that because cancer affects the brain’s ability to manage fine motor control, early signs of the disease could be detected in the pauses between pen strokes. Most scientists demurred.

Still, diagnostic links between sickness and script seem to exist. “Writing is an exquisite fine motor skill—unlike brushing your hair, for instance,” explains José Contreras-Vidal, a neuroscientist at the University of Maryland’s School of Public Health. “People spend years practicing it, consolidating a very robust motor-control program in the brain.” So, he says, deterioration of that finely honed skill is a red flag that something may have gone awry in the brain’s ability to run the program.

The examples that follow demonstrate other striking ways in which writing may be a measure of health.

The nymph Echo of Greek mythology was doomed to forever repeat the words of others but never speak her own. Some people share her fate on paper. Says Marcelo L. Berthier, professor of neurology at the University of Malaga in Spain, “Such patients write down everything they see or hear: text from books, magazines, street signs, questions you ask them, clothing labels.” Although these individuals can copy language perfectly, their attempts to express original ideas typically are incomprehensible.

Called echographia, this peculiar phenomenon has been observed in patients with stroke, traumatic brain injuries, dementia, intracranial tumors, epilepsy and Alzheimer’s. Berthier suspects that damage to the frontal or temporal lobes may lead to hyperactive mirror neurons—cells in the brain that are aroused not just by performing a particular action but also by witnessing it. The result is people who cannot read text or hear conversation without the urge to imitate it.

Odd as it sounds, echographia is reminiscent of a normal stage of human development: Babies incessantly echo what they hear, though they learn to suppress this behavior as they become capable of generating language spontaneously. 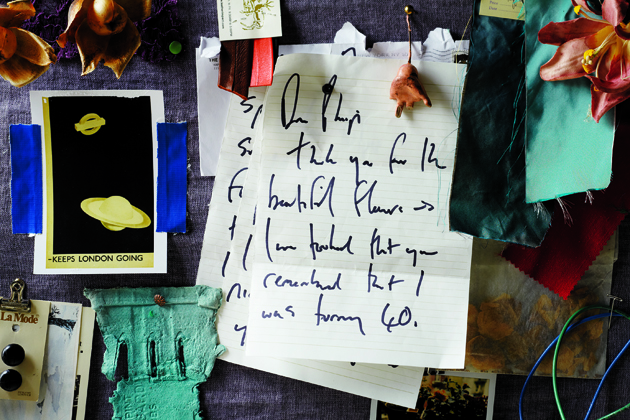 Contrary to what a graphologist might suggest, abnormally large handwriting has nothing to do with egotism, though it may portend the neurodegenerative disorder Huntington’s disease. Those with macrographia not only tend to write each letter large, but one letter differs markedly in height from the next. In Huntington’s patients, these aberrations result from a breakdown in the cells of the basal ganglia, which relay sensory feedback about movement. When such information is improperly communicated, patients have difficulty controlling the size and shape of their script.

Ashwini K. Rao, assistant professor of clinical physical therapy at Columbia University, says that macrographia may reflect a compensatory mechanism: If patients with Huntington’s manipulate a light object like a pen, it provides little sensory feedback, so they use extra force to prevent the object from slipping away.

They’ll write on almost anything—toilet paper, clothing, their own skin. Some patients cover every available surface with frantic compositions characterized by ornamental strokes and meticulous underlining. This is hypergraphia: an irresistible urge to write, a condition typically associated with temporal lobe epilepsy, the manic phases of bipolar disorder and schizoaffective disorder.

Normally, researchers believe, writing is carefully regulated by the brain. The limbic system, a series of interconnected pathways in the brain, provides the emotional urge to communicate. That urge drives language and idea generation in the frontal lobes—but activity in the temporal lobes, which control the perception of meaningfulness, tends to inhibit the frontal lobes. Localized abnormalities in brain structure can disrupt the balance among these areas, resulting in an uninhibited desire to communicate.

Alice W. Flaherty, a neurologist at Massachusetts General Hospital, years ago recognized her own hypergraphic tendencies as an early sign of bipolar disease. Though hypergraphia looks compulsive from the outside, it’s suffused with sensuous pleasure, she says. “You become excited by the sounds of words, their shapes, the different colors of ink,” Flaherty says. “It’s all very luscious.”

Some healthy people have small handwriting all their lives—Charlotte and Emily Brontë filled matchbox-size books with miniature script. But if a person’s writing suddenly starts to shrink—letters contracting until they’re cramped and indecipherable, a condition called micrographia—it may be a sign of Parkinson’s, a neuromuscular disease marked by deterioration of dopamine-producing cells in the substantia nigra, the midbrain area that coordinates motor control. Eventually the slowness of movement, rigidity and tremors that cause the small handwriting spread throughout the body.

Micrographia can appear years before these other symptoms. And because changes in the familiar style of one’s own handwriting are troubling, notes neurologist Charles Adler, professor of neurology at the Mayo Clinic, they can spur patients to see a physician early on.

Handwriting may be important for Parkinson’s patients in another way, says Contreras-Vidal. Using a digital pad to capture such kinematic data as speed and smoothness of motion as a patient writes, physicians can create a personalized neural model of motor control and match it against another model simulating how different drugs enter and affect the brain. “Then,” he says, “we could predict the best type and amount of medication for that person.”