Esophageal adenocarcinoma is increasing at a rate unmatched by any other cancer. There’s no simple explanation—just many complex clues.

WHEN DAVID KELSEN EMBARKED ON A SEARCH in the late 1970s for potent chemotherapy drugs to fight cancers of the esophagus, everyone in his research trial had squamous cell carcinoma, caused principally by smoking and alcohol abuse. Ten years later, Kelsen, chief of gastrointestinal oncology at Memorial Sloan-Kettering Cancer Center in New York City, was the lead investigator of a national trial designed to compare the effectiveness of surgery alone to chemotherapy followed by surgery. This time, though, many patients screened for the study had adenocarcinoma, an unusual cell type for a tumor at the junction of the esophagus and stomach. What’s more, most appeared to be otherwise quite healthy. “It was striking people who didn’t smoke, didn’t drink and exercised like crazy—very healthy guys in the prime of life,” says Kelsen.

The rapid proliferation of esophageal adenocarcinoma has continued, its rate of occurrence in the U.S. population growing faster than the rate for any other cancer. During the past 30 years, the number of new cases annually has skyrocketed more than 300%, and among white men, once only rarely diagnosed with the disease, the increase is almost 600%. “That kind of growth is unprecedented,” says Thomas Vaughan, head of epidemiology at the Fred Hutchinson Cancer Research Center in Seattle. Meanwhile, the once predominant type of esophagus cancer—squamous cell carcinoma—has been steadily dropping 3% to 4% each year as smoking and alcohol abuse also decline.

Although white men have become the primary target of this disease (82% of all cases now involve Caucasian males), increasing numbers of black men and white women are also developing the tumor. “At the Cleveland Clinic, one in four of those with esophageal adenocarcinoma is a woman, and the disease is now affecting men younger than 50,” says Gary Falk, professor of medicine at the Cleveland Clinic Lerner College of Medicine of Case Western Reserve University. And though the numbers remain small, this is a cancer you really don’t want to have. The average five-year survival rate is a grim 13%, and most patients die within a year of being diagnosed. But if the cancer is caught very early, the five-year survival rate jumps to 70%.

No one is sure why the rate of esophageal adenocarcinoma is spiking. Already, though, much is known about this relatively new disease. Its development tends to follow a linear progression: To get it, you will likely first have gastroesophageal reflux disease, or GERD, followed by a complication of GERD known as Barrett’s esophagus that may, in turn, lead to cancer. Having traced that path, scientists are hoping to put up roadblocks—stopping GERD from developing into Barrett’s esophagus, identifying those who have Barrett’s, determining whether they’re likely to get cancer and developing treatments. Yet each step of that seemingly straightforward approach has brought its own complications. 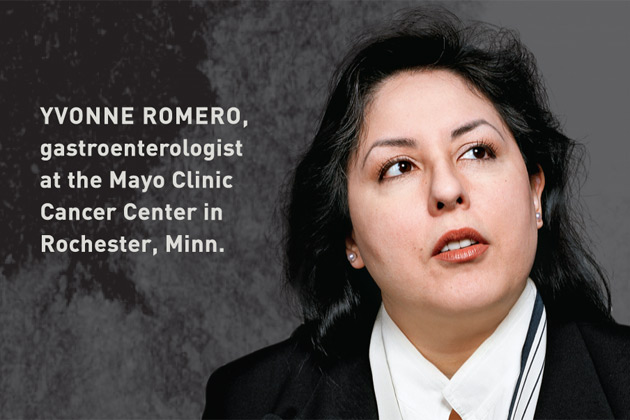 Barrett’s esophagus is characterized by elongated “goblet” cells resembling those in the intestines rather than the flat, smooth cells of the esophagus’s epithelium. “The normal lining is icy pink and looks like tile under the microscope,” says Yvonne Romero, a gastroenterologist at the Mayo Clinic Cancer Center in Rochester, Minn. “Barrett’s looks red to the naked eye and like shag carpet under the microscope.”

Being diagnosed with Barrett’s increases the risk of esophageal adenocarcinoma by as much as 125 times (though in a given year, only one in 200 people with Barrett’s esophagus will advance to full-blown adenocarcinoma). Part of the reason for the link, Romero suggests, is that as the damaged cells try to heal, they divide more frequently than normal and thus have a greater likelihood of mutating into cancer cells.

Once Barrett’s is diagnosed, patients can be watched closely, with biopsies of anything that looks suspicious, followed by aggressive treatment if cancer is found. But diagnosis is a major stumbling block. Of the 60 million Americans with GERD, only about 7% develop Barrett’s. And while those who have suffered years of chronic reflux are most at risk, 40% of people who develop esophageal adenocarcinoma have no symptoms at all. In Olmsted County, Minn. —one of only a handful of “enumerated” counties in which records are kept about every health care procedure for every citizen—just one in seven people with Barrett’s knew he or she had the disorder. “Using symptoms as an indicator of Barrett’s is not terribly helpful,” says Romero.

A much better option is endoscopy, an unpleasant $1,000 test that involves snaking a fiber-optic tube down the throat and into the esophagus. But this too poses problems. Ordering the test for everyone with GERD would be prohibitively expensive, not to mention unnecessarily alarming to the millions who will never get Barrett’s. And those with asymptomatic GERD wouldn’t get tested in any case.

Still, some physicians think endoscopy can be cost effective. According to David Johnson, chief of gastroenterology at Eastern Virginia Medical Center in Norfolk, most Barrett’s-related cancer is discovered in middle age. So a single test when you’re in your early fifties should be sufficient to determine whether you have Barrett’s. “If you don’t, there’s no need for repeat endoscopy,” says Johnson, who recommends the test only for individuals who have had GERD symptoms for at least five years. 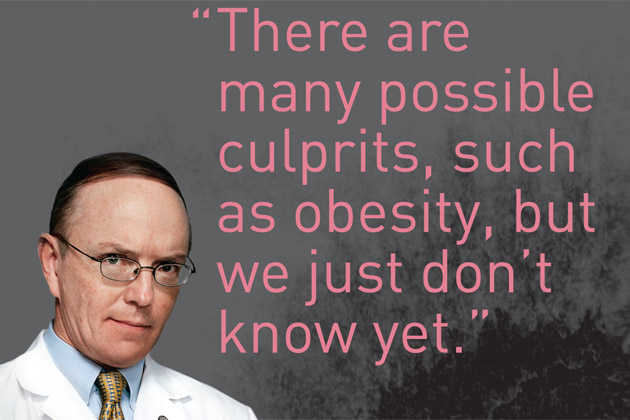 Yet even Johnson’s relatively judicious approach amounts to a large and costly fishing expedition. In contrast, finding a genetic link could lead to easier, cheaper screening, and Romero thinks she’s on track to find the genes. In one study of 278 people in 31 families that have multiple members with Barrett’s and esophageal adenocarcinoma, Romero identified areas on one chromosome that may contain genes for both conditions. And on a different chromosome, she found possible genes for GERD and hiatal hernia, a frequent component of reflux disease. Now she’s looking at 94 more families to try to identify specific genes.

“Once you find the gene in the families, you can look at others with Barrett’s to see whether they have that gene or whether you’ve only found a familial form of Barrett’s,” says Romero. “If we’re lucky and find that a particular gene causes Barrett’s in everyone, we can develop a blood test for early detection.”

AS HELPFUL AS IT WOULD BE TO IDENTIFY everyone with Barrett’s, that still leaves the question of how to know who among those with the disorder will develop esophageal adenocarcinoma—and how to stop the cancer in its tracks. Vaughan’s colleague Brian Reid and others at the Fred Hutchinson Cancer Research Center have made progress on the first issue. In a recent study, the team found four key biomarkers in biopsied Barrett’s cells: abnormalities of two chromosomes that control tumor-suppressor genes and two genetic aberrations that yield abnormal amounts of DNA. Barrett’s patients with three or four of these biomarkers have a nearly 80% risk of developing cancer within the next eight years. The team is now working on a standardized test for clinical use.

Until the test reaches the market, people with Barrett’s have other options. One is watchful waiting. Beyond that, they can either submit to the definitive cure—major surgery that removes the portion of the esophagus with precancerous cells—or undergo photodynamic therapy, originally used to allow people to swallow as a growing tumor threatened to close off their esophagus. The therapy eliminates Barrett’s in 50% to 60% of cases, and in another third eradicates just the precancerous cells but not the goblet cells (meaning that precancerous cells could redevelop), says Norman Nishioka, a member of the gastrointestinal unit at the Massachusetts General Hospital. 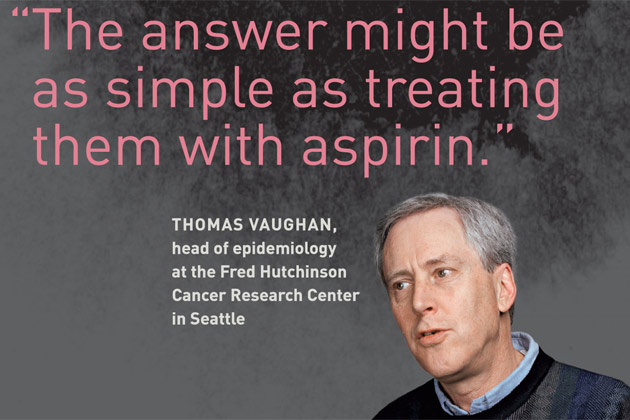 After injecting patients with a photosensitizing drug, doctors use an endoscope to train a laser on the precancerous cells, creating a chemical reaction that kills the cells on the esophagus’s outermost layer. The cells that replace the precancerous ones are normal, and with aggressive treatment with proton-pump inhibitors to control reflux, they may stay that way.

There’s also a chance that treating Barrett’s patients with aspirin could become standard practice. When Vaughan questioned 350 people with Barrett’s about the medications they were taking, he found that those who frequently took nonsteroidal anti-inflammatory drugs (NSAIDs) such as aspirin and ibuprofen had a nearly 70% lower risk of adenocarcinoma of the esophagus compared with people who didn’t. The study by Reid’s team found that aspirin’s impact is profound even among high-risk patients: Those who took aspirin or other NSAIDs had a 30% risk of developing cancer within the decade, compared with 79% for those who did not.

A clinical trial to test the theory that aspirin can slow the progression from Barrett’s to cancer is under way in Great Britain, and Romero is recruiting patients for a U.S. trial. “If we can confirm the positive effect of aspirin, we could give low doses of it to Barrett’s patients who don’t have a history of stomach ulcers or kidney disease,” says Romero.

THE EVOLVING APPROACHES TO DIAGNOSIS and treatment of esophageal adenocarcinoma could help stem the cancer’s rise even without knowledge as to why the disease is proliferating so rapidly. Meanwhile, theories abound. Possible culprits range from obesity, which is also soaring, to the overuse of proton-pump inhibitors in treating GERD, to prescribing antibiotics that kill the Helicobacter pylorum bacterium, which causes ulcers but may help protect against Barrett’s esophagus and esophageal adenocarcinoma.

Some researchers, however, think there may be a surprisingly simple explanation for the spike in diseases of the esophagus. “My guess is that Barrett’s and esophageal adenocarcinoma are just as common as they have always been,” ventures Romero. “The average age for the onset of this cancer is 63, which may suggest that many people died before they got it. The longer you live, the longer cells are at risk of developing cancer. And now that everyone wants to live until 100, cancer of the esophagus at age 63 is a problem.”

“Epidemiology and Pathogenesis of Esophageal Cancer,” by Rebecca S. Holmes and Thomas L. Vaughan,Seminars in Radiation Oncology, January 2007. A comprehensive discussion of the risk factors for esophageal adenocarcinoma, the theories that may explain why the incidence of this cancer is skyrocketing, and possible steps to reverse the trend.

“Gastroesophageal Reflux, Barrett Esophagus, and Esophageal Cancer: Scientific Review,” by Nicholas Shaheen and David Ransohoff, JAMA, April 17, 2002. An excellent overview of what we know about the association between GERD and esophageal cancer; argues against routine screening of individuals with reflux disease.

“Diet, Obesity and Reflux in the Etiology of Adenocarcinomas of the Esophagus and Gastric Cardia in Humans,” by Susan T. Mayne and Stephanie A. Navarro, The Journal of Nutrition, November 2002. Research presented at a symposium on food, nutrition and cancer held by the American Institute for Cancer Research and the World Cancer Research Fund International that explores how diet, obesity and GERD may interact to cause cancer.

Burnout, the pandemic and other pressures have sent record numbers of health care workers rushing for the exits. What would make them stay?