A Tough Job Made Tougher

“Disabled” doctors? They don’t like the term or the implication, and their careers have been anything but limited.

SIR WILLIAM OSLER BELIEVED that physicians should use all of their senses when examining patients. “Learn to see, learn to hear, learn to feel, learn to smell,” implored Osler, the influential clinician and teacher, who died in 1919. Yet people who can’t see or hear, or who have other physical limitations, manage to become successful physicians. No one knows how many doctors in the United States have major disabilities, but the number seems to be rising modestly. In part that’s thanks to technology, such as electronic stethoscopes that allow deaf physicians to listen to body sounds and software that reads patient records and other important documents aloud for blind physicians.

It’s worth going to the trouble of doing what’s required to enable disabled physicians to practice, says Christopher Moreland, a hospitalist at the University of Texas Health Science Center at San Antonio. “There’s evidence that diversity among health care professionals helps improve patient health,” he says. Deaf since birth, Moreland believes his condition benefits his interactions with patients. “I have to focus more in how I communicate,” he says. “People tell me I’m a good listener.”

Here, three people in medicine—Chris McCulloh, a resident in general surgery at Morristown Memorial Hospital, in Morristown, N.J.; Amanda Mooneyham, soon to graduate from University of California at Davis School of Medicine; and Stanley Wainapel, clinical director of rehabilitation medicine at Montefiore Medical Center in the Bronx—talk about how determination and encouragement (and an occasional assist from technology) have helped them pursue and sustain careers in medicine. 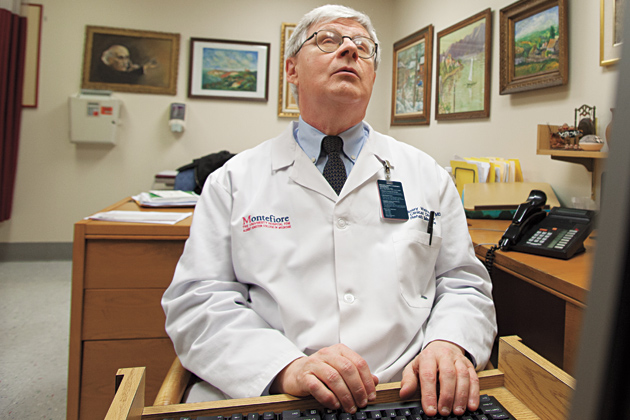 A patient, considering an epidural injection for pain, worried about the small risk of spinal cord trauma. “I don’t want to end up a cripple,” he said—and then flushed and apologized to Chris McCulloh, seated in his wheelchair. “It really didn’t bother me,” says McCulloh, who is paralyzed from the waist down because of a spinal cord injury in 2008. Indeed, he believes his disability often helps him connect with patients. “It allows me to say, I’ve been in the bed, I’ve had tubes in me, I know what it feels like,” he says.

Before his accident, McCulloh, 34, had been accepted to several medical schools and hoped to become a surgeon—a choice that seemed impossible afterward. But then the surgeon wife of a friend noted: “We don’t move around that much in the operating room. If you can get yourself to the table, why not?”

McCulloh attended Case Western Reserve University School of Medicine, where he got himself to the operating table courtesy of a standing wheelchair. He says his technique is like any other surgeon’s, with small exceptions. For instance, he can’t simply shuffle his feet to move sideways. “I need to back up, move down and come back in,” he says. “I do things differently, but it doesn’t mean I can’t do them.” 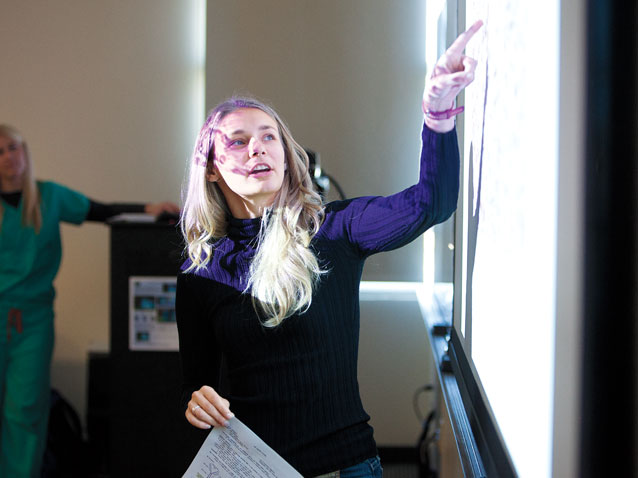 Amanda Mooneyham, 26, has had 90-decibel bilateral sensorineural hearing loss since age three; reading lips and using hearing aids enable her to carry on conversations. Still, during her clinical rotations in medical school, she found herself struggling. When residents presented their patients, people talking over one another made it difficult for her to follow everything they said, and one professor wrote in an evaluation that she appeared “disinterested.”

With help from the Student Disability Center at UC Davis, Mooneyham got an American Sign Language interpreter to sign for her during clinical rounds. But when she moved on to surgery, she worried that an interpreter might not be able to hear surgeons mumbling without touching the sterile field. The solution: Clip microphones to surgeons’ scrubs and have an off-site transcriptionist relay their words in real time to an overhead monitor. Mooneyham also created clear plastic surgical masks that allowed her to read lips.

Mooneyham has also worked with ASL interpreters in other situations, such as in teaching anatomy to first-year students. She graduates in 2014 and plans to practice family medicine. Patients she has encountered treat her like any other doctor, Mooneyham says, though her ability to sign ASL has obvious appeal for some. “I’ve noticed a huge difference when working with patients who sign,” she says. “Many have asked me where I will be practicing medicine. 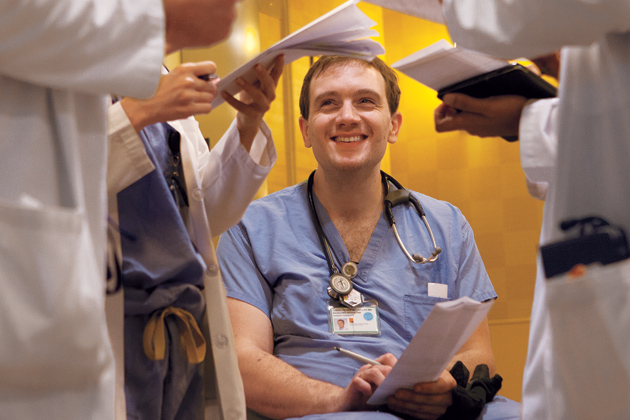 Stanley Wainapel’s mother and father, a nurse and a doctor, dreamed of their son following them into medicine. But at age eight he developed choroideremia, a condition that gradually narrows the field of vision to the point of blindness. Still, Wainapel’s ophthalmologist encouraged him to attend medical school—a very enlightened attitude, says Wainapel, 67, who graduated from Boston University School of Medicine in 1970: “He was thinking about what I could do instead of what I couldn’t do.”

Though Wainapel’s range of vision had narrowed, during medical school he could still see well enough to read and use a microscope. But by 1985, he had to begin using a white cane, and for the past 10 years or so he has lived with near-total blindness.

A physiatrist, Wainapel treats patients with disabilities resulting from disease or injury. Diagnosing some problems, such as skin rashes or wounds, requires vision, so Wainapel will bring in a colleague to assist. But Wainapel says that his remaining senses provide a wealth of information, and he believes there are times when sight gets in the way. After all, how do most doctors listen to a faint heart murmur? “They close their eyes,” he says, “because they want to focus on the sound.”