The history of nursing runs throughout the Bulfinch Building—even up and into its iconic dome.

Most people know the saucer-shaped Ether Dome as the place where surgical anesthesia was first demonstrated. Almost three decades after that event, however, the crown of the hospital played a very different role as dormitory for its nurses, who were vanguards of a movement to advance their profession.

In the earliest days, the hospital’s nurses didn’t receive much formal training, relying on simple “rules of thumb,” as one early account reads. Even when Georgia L. Sturtevant started as an assistant head nurse in 1862, duties focused less on healing and more on housekeeping—washing “filthy clothing and foul dressings,” carting patient meals, cleaning dishes and mopping wards, she recalled in a series of later essays. 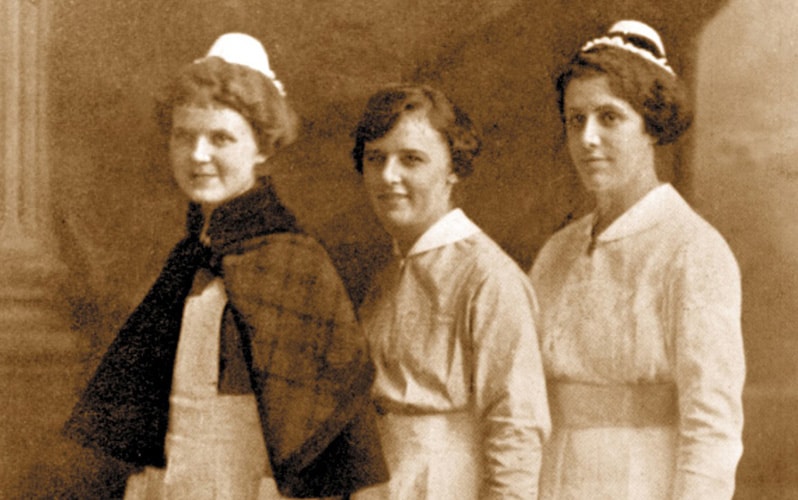 From left to right, a student nurse, a preliminary nurse and a graduate nurse at Mass General pose for the camera in 1922.

For many medical practitioners at the time, sleeping on-site was a given. Many nurses bunked in attics above wards; others slept two to a bed in the Bulfinch Building’s sitting rooms, folding up their beds before shifts that started at 5 a.m. and ended at 9:30 p.m. The nurses dined using pewter utensils in a dingy basement that had once been the hospital’s kitchen, next to its defunct brick oven.

Many nurses were eager to provide better patient care, yet “were blamed for their ignorance if they failed in some point and were reprimanded rather unpleasantly if they knew too much,” Sturtevant wrote. But change was in the air: Florence Nightingale had just founded the world’s first nursing school in England, and the U.S. Civil War thrust nurses into new prominence.

In 1873, the Boston Training School for Nurses launched at Mass General. One of the nation’s first three nurse training programs, it faced opposition from most of the hospital’s doctors, some of whom fretted that a little bit of knowledge in the hands of nurses was perhaps a dangerous thing, according to Sarah Cabot, a school founder.

Linda Richards, who had graduated from the nation’s first hospital nursing school, became superintendent the following year. Under her leadership, nurses had access to a textbook, a thermometer and scrub women to help with menial tasks. Nurses began wearing tidy uniforms of matching aprons and cuffs. Richards also started the practice of keeping bedside charts.

Nurses slowly began to work in every ward, and physicians, evidently impressed, lectured trainees and permitted them to attend rounds and assist with surgeries. The number of pupils grew, forcing some to sleep in the stifling heat of the Bulfinch attic, where they could hear the clanging bells from the fire station across the street. 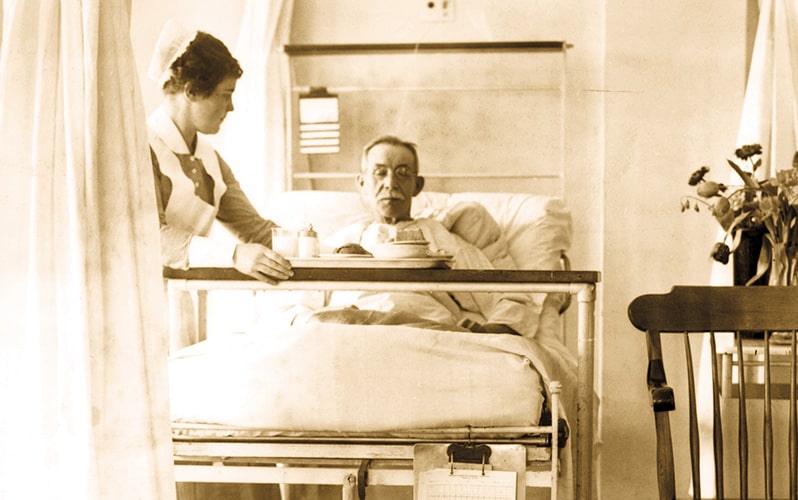 During the 1920s, nurses were also critical to the working of wards in which clinical research took place.

By the turn of the century, nursing education had spread widely and many MGH Nursing School alumnae were leaders in their craft. Sophia Palmer launched the American Journal of Nursing in 1878, and other graduates became superintendents of nursing in more than 160 hospitals.

Perhaps the most telling measure of progress, however, was that by 1903, nursing students were administering ether. Just 40 years after bunking down in the birthplace of anesthetized surgery, nurses had become an integral part of that procedure and all patient care at the hospital.