FOR PRIMARY CARE PHYSICIANS, THE TREADMILL turns ever faster: Increasing overhead and decreasing reimbursement rates leave them little choice but to see more patients in a day—as many as 3,000 in a year—with hardly any time to treat them.

In response, some physicians are entering what’s called concierge medicine (24-hour access in exchange for a hefty retainer), hoping to make up in higher fees what they lose in patient volume. Another group is taking a different tack, opening small, independent practices but keeping care affordable by trimming overhead and harnessing technology. While a simplified professional and domestic life—seeing a patient in a home office one moment and making lunch for the children the next—is alluring, these doctors say the real attraction is being able to provide what they regard as better care.

Gordon Moore, who coined the term micropractices as a family physician in upstate New York, estimates there are about 425 such offices in the United States. Physicians needn’t be in solo practice to qualify as micropractitioners, he explains: It’s a matter of access (patients can contact their doctor after hours or get a same-day appointment if needed), continuity (patients always see the same doctor) and efficiency (office management tasks that do not affect patient care are outsourced or automated).

The experiences of patients in these practices, Moore says, are encouraging. In a 2007 paper he co-wrote in the journal Family Practice Management, Moore reported patient responses from 50 practices, including 12 micropractices. The alternative practices scored high in patient satisfaction across a broad range of criteria. For instance, in micropractices 60% of patients with chronic illnesses said they had been helped significantly in living with their condition, compared with 35% in standard practices.

Yet some critics question whether such an approach is a realistic solution for a strained national health care system—or simply a refuge for a few burned-out physicians. David U. Himmelstein, a Harvard Medical School associate professor and chief of social and community medicine at Cambridge Hospital in Massachusetts, says micropractices could ultimately add to the burden of other primary care physicians because “lower volume for some means higher volume for others.”

Moore, on the other hand, says the real problem is that too many doctors are shunning primary care and won’t return unless such movements as micropractices make the field more attractive. Yet Himmelstein questions whether physicians will ultimately feel pressured to raise their rates for a smaller number of patients who are willing and able to pay.

Moore concedes that the economic challenges are real but insists that the micropractice represents a fundamentally new approach to primary care. “If my goals are the number of patients I see per day and the number of claims I can submit, I’m spending less energy on patient care,” he says. “When you can spend more time improving the human condition, that’s when your work becomes about dignity and respect.”

Here’s how three micropractitioners are having a go at it. 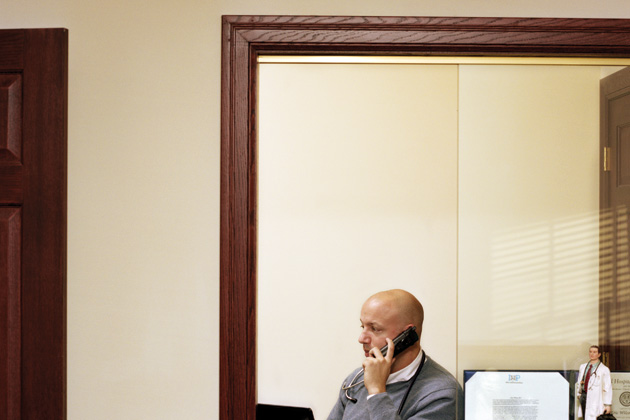 In theory a micropractice shouldn’t be viable in New York City, where the high cost of living and of malpractice insurance and low rates of reimbursement make the region a “dead zone” for physicians who want to follow the model, says Gordon Moore. But family practice physician Moitri Savard has made it work by minimizing expenses and working part-time at a private practice while she got her solo business off the ground. Savard rents a cozy office in Long Island City, across the river from Manhattan, in a building that once housed a speakeasy. She shares the office and staff with a physical therapist and an acupuncturist; patients book appointments on her Website. Because she works only limited hours, she pays part-time malpractice insurance.

It’s not the career she envisioned when she studied with Nobel Prize—winning economist Amartya Sen at Harvard. But while there, she also led canoe and hiking outings, and became certified as an EMT so she could deal with emergencies. Plans for a career in economics were cast aside, and after completing medical school and working briefly at a group practice in Manhattan, Savard opened Queenswest Health and Wellness in October 2006.

She disputes the criticisms that micropractices are elitist and that by capping her patient load she’s contributing, in however small a way, to the shortage of primary care physicians. With 750 patients, “I could stop taking new ones,” she says. “But that would be doing a disservice to the community, because there aren’t many physicians here.” Instead she has taken on a partner, a friend from medical school who will build her own patient panel and with whom Savard will alternate hours so the clinic can operate on a full-time schedule.

Jean Antonucci scorns such euphemisms as “economically challenged” to describe her patients. “They’re poor,” she says. Antonucci works in Farmington, Maine, where the median household income is just under $27,000.

In 2002 she read about micropractices in the journal Family Practice Management while working at a Veterans Administration hospital. By 2005 she had set up a practice in a 125-square-foot room. She found that many patients had the same problems: obesity, depression, diabetes, unemployment and lack of social support. In a eureka moment, she decided to treat everyone at once.

Once a month for nearly two years, she held 90-minute group visits, inviting four to six patients with multiple health challenges to work on problem-solving and communication skills, such as how to break weight loss into manageable steps or get a spouse to help keep track of a medication regimen.

Antonucci is frank about the challenges of being a solo practitioner: Half her patients are on Medicare, and she often waits months for payment. But for her, the ability to help patients manage their own health is worth the trouble. “If I wanted to hold these visits in some big group practice, I’d have to go through layers of management,” she says. “Here, if I want to do something, I just do it.”

Fresh out of residency and saddled with hundreds of thousands of dollars in medical school loans, osteopath Eric Wilcox decided to start a micropractice. He was well aware that his income would be limited. But for him there was no other choice. The event that pushed him over the edge, he says, was having just 15 minutes to tell a mother that her 14-year-old daughter was pregnant.

Since Wilcox opened Pittsford Family Medicine outside Rochester, N.Y., in March 2008, he has used technology to help free up time for doctor-patient interaction. Patients book appointments on his Website. Same-day slots are usually available—a new patient gets 60 minutes—and Wilcox offers home visits. Each patient is assigned a secure Web portal on which medical records and e-mails are stored.

Using e-mail relieves Wilcox’s burden. “It’s a lot easier to answer 15 e-mails than 15 phone calls,” he says. He also asks that patients periodically take an online survey to help him improve his processes.

Yet at the business end the learning curve has been steep. In addition to buying advertising to attract patients—Wilcox now has about 350—he must function as a one-man billing department and grapple with the vagaries of insurance claims. To shore up his finances, he works mornings every other week at a local hospital.

Despite such challenges, he says, “In many ways, I’ve been happy with the experience.”